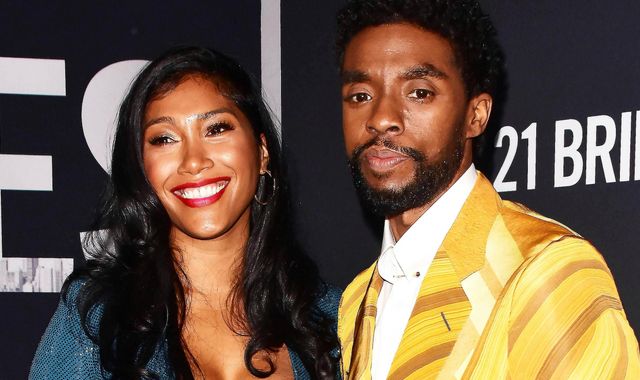 Chadwick Boseman's widow paid an emotional tribute to the "most honest person", fighting back tears as the actor was honoured posthumously during an awards ceremony.

Black Panther star Boseman died in August at the age of 43 after suffering from colon cancer for four years, keeping his illness private.

His performance in his final role, playing an ambitious trumpeter in Ma Rainey's Black Bottom alongside Oscar winner Viola Davis, was honoured at the Gotham Awards on Monday evening.

Nomadland, which stars Frances McDormand, another former Academy Award winner, as a middle-aged woman travelling through the American West, was named best feature and also won the audience award.

The Gotham Awards, hosted by the Independent Filmmakers Project (IFP), are seen as a reliable bellwether for the Oscars.

Accepting the actor tribute to Boseman, his wife, Simone Ledward Boseman, described him as "the most honest person I've ever met".

She said: "He didn't just stop at speaking the truth, he actively searched for it in himself, in those around him and in the moment.

"The truth can be a very easy thing for the self to avoid but if one does not live in truth, then it's impossible to live in line with a divine purpose for your life.

"And so it became how he lived his life, day in, day out, imperfect but determined. In doing so he was able to give himself over fully to every moment, to be totally present in his own life and in the lives of the people he became.

"He was blessed to live many lives within his concentrated one."

She said it was an honour to receive the award on her husband's behalf, describing it as "an acknowledgement not only of his profound work but of his impact on this industry and this world".

"Chad, thank you. I love you, I am so proud of you. Keep shining your light on us," she added.

Usually taking place with a glamorous ceremony in New York, this year the Gotham Awards ceremony relied on a mix of live and virtual elements.

British star Riz Ahmed was named best actor for his portrayal of a drummer who becomes deaf in The Sound Of Metal, while best actress went to Nicole Beharie for her role as a single mother and former beauty pageant queen in Miss Juneteenth.

Another British star, Kingsley Ben-Adir, won the award for breakthrough actor for his portrayal of Malcolm X in One Night In Miami, while in the TV categories, Michaela Coel's I May Destroy You was named breakthrough series (short format), while the long format category was won by Watchmen.