Bobi Wine: The pop star, the presidency, and how politics in Uganda can be a dangerous business 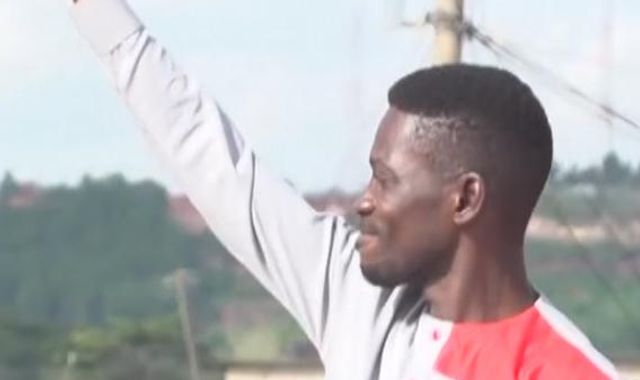 In Uganda, running for the presidency can be a dangerous business - especially for pop star turned politician Bobi Wine.

The 38-year-old, who is the leading opposition in the country's upcoming presidential election, has told Sky News he has been targeted with bullets and tear gas and "miraculously" survived several attacks in the run-up to the vote.

"It's not out of fashion to put on a bullet-proof jacket and a ballistic helmet," he said. "It was an effort to secure my life some more. That is after I survived gun attacks more than once, more than twice, I was targeted. My car was riddled with bullets, flattening old tyres. And at one occasion, the military shoot into the windscreen of my car.

"Miraculously, I'm still alive and nobody was shot dead in my car. However, many of my close allies have been shot dead."

After making the improbable journey from the slums to the recording studios of East Africa, Wine - real name Robert Kyagulanyi - is now challenging the 35-year rule of Uganda's incumbent president, Yoweri Museveni.

His singing career, a genre he describes as "edutainment", took off in the early 2000s, with lyrics decrying urban poverty and political oppression, backed by catchy, feel-good beats.

Harnessing his musical fame to start a political revolution, he is promising equality, "a Uganda where we are respected and applauded on an international platform, not known for poverty, disease, corruption, and for dictatorship - that's the Uganda we envision as a generation".

When Mr Museveni took power in 1986, he was praised as a visionary. But five presidential terms later, is he about to be unseated? In a country with one of the youngest populations in the world, Wine is certainly expected to do well.

However, he has been arrested multiple times during his campaigning. Mr Museveni has deployed the military to prevent what he sees as opposition attempts to create civil unrest that could cause regime change.

The election "is being stolen and rigged", Wine claims.

Wine says he will continue, despite saying his life is at risk. "I live every day as if it's the last day. My life is threatened, the life of my wife is threatened, my close allies and everybody that associates with me.

"But we keep going knowing that our lives do not end with us. So many people have already paid the ultimate price, and my life is not any much more valuable than the lives of the people of Uganda."

So undeterred, he is calling on Ugandans to vote and "change our country forever" when the election takes place on Thursday.

"This is our only opportunity," he said. "We are non-violent. So we are using this election as a protest to speak - and speak loudly."

(c) Sky News 2021: Bobi Wine: The pop star, the presidency, and how politics in Uganda can be a dangerous business