Backstage with... the stars of The Spanish Princess 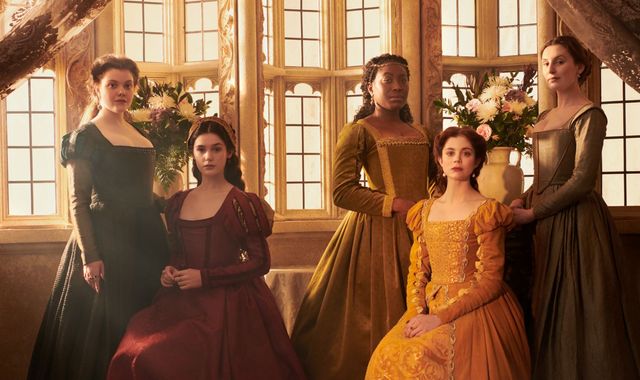 Everyone knows about King Henry VIII - we study him at school, and there are countless book and several TV shows dedicated to the events of his life.

But the Starzplay TV series The Spanish Princess is trying to give a new perspective to that period, looking at what went on through the eyes of the women involved.

It makes a refreshing change, and for the female stars of the show, they hope it's a sign of a brighter future.

"I've felt since coming out of drama school there have been really exciting opportunities, but it's also funny how they're kind of circled as, 'this is a show about women'," says Downton Abbey star Laura Carmichael, who plays Maggie Pole (or Margaret Pole, Countess of Salisbury, to give her her full title).

"It will be great to get to a point where it's like, 'this is a new show', which I think is on the horizon and coming, and people won't think it's a big deal that we had all female directors, they'll just think those directors are great.

"Audiences have such a huge appetite for these stories, and I think people are listening and responding to that in the right way, but we just need more of it."

Carmichael's co-star Georgie Henley, who plays Princess Meg Tudor, Queen of Scots, tells Backstage that a lack of diversity in female roles is a very recent memory for her.

"I feel really lucky with the roles that I've had, but I can't tell you the amount of auditions that I did from the ages of 16 to 21 where I was auditioning to be someone's girlfriend or someone's daughter," she says.

"It does still happen a lot and actually some of those roles are incredible, but I think there's definitely more of a shift to trying to subvert those ideas and how can you bring nuance and dimension to those roles that maybe 10 years ago, 20 years ago, were perpetually cookie-cutter and just not interesting, not fun. Like, give me something to work with!"

Carmichael agrees that while some characters are still pitched as two-dimensional, women now have the agency to push back.

"I think that is the difference now," she says. "I think if you read a script that is like that, you go, there's nothing to this woman other than the fact that she's married to the lead character. We're now in a position to say, 'I'm not interested in that and this is why'.

"I think on the backs of the people who came before us, we are able to really say that and people respond to that in the appropriate way now, which I think is new and exciting."

Game Of Thrones star Charlotte Hope plays the lead character, Queen Catherine of Aragon, who - after delivering a male heir and brokering a union with her father the King of Spain - seems to be in a good place, but things quickly change when the baby dies and her father double-crosses her.

Hope says that despite being hundreds of years apart, she and Catherine are actually very similar.

"I want to get married and I want to have kids and I want a career, and I'm terrified a lot of the time that I won't be able to have children or my career will fall apart, and those anxieties are very real to me," she says.

"They're the same anxiety it's just that hers are way more serious than what I'm going through, but I really feel like I can relate to her, I think that that's what's really powerful about this series - yeah, it's escapism and it's heightened, but the stuff they're talking about is stuff that women are still going through."

Hope is open about how hard she has found life this year since the pandemic and says she draws inspiration from Catherine when she is struggling.

"I really try and remember that Catherine went through the ringer and she just carried on getting up," she says.

"Every time she was knocked down she was like, I'm still fighting... And so, yeah, I hope I can take that strength into other jobs but to be honest, even just in my life.

"When I've been struggling this year, I'm like, Catherine went through way worse and she was okay, so you can keep your head above water, Charlotte."

The Spanish Princess returns to streaming service Starzplay on 12 October. Listen to our interviews in this week's Backstage podcast

(c) Sky News 2020: Backstage with... the stars of The Spanish Princess