Backstage with Salma Hayek: 'People have created their own Bliss worlds as a coping mechanism' 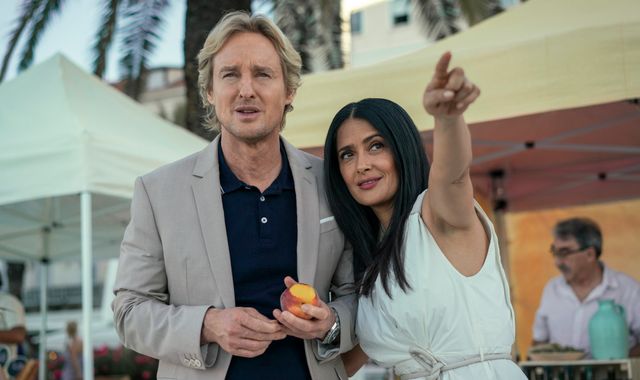 In Salma Hayek's new film Bliss, it's not clear to the viewer whether her character Isabel is a deluded drug addict or an innovative scientist.

But what is clear is that in this sci-fi it's the female lead calling the shots.

Isabel enters the picture as the other main character Greg, played by Owen Wilson, is at a low point after a divorce and losing his job. But she tells him not to worry as the world they are in is merely a simulation - she might be homeless there, but in the real world she is revered for her work in science.

While we may not be sure of her motives, it's Isabel who is dominant over Greg. She has knowledge and understanding that he doesn't, and it's her who has the power in their relationship.

"I don't think about it too much, but I guess I gravitate to them naturally," she says. "It's not that I say, 'if it's not a strong woman, I'm not going to play it'.

Hayek says she was drawn to this part because of the duality - but there is one aspect of Isabel she particularly likes.

"I like uniqueness, I love the possibility of playing two strong female leads in one film," she says. "I get to play two characters and two characters I've never played - either one of them. But I did like that she was bossy."

Hayek's character claims that the world around them is a creation and that the real world is far superior to the one that Greg and Isabel are living in.

The film was shot before the pandemic took hold, but Hayek says the themes of escapism and parallel lives are reflected in our lives since the coronavirus outbreak.

"When we came out [of filming] and I was reading articles and all that and everything, my whole universe, everybody started to change," she says.

"We all have gone through a tunnel of incertitude, you know, and I started seeing how everybody started creating their own Bliss world through technology in their house, where they could escape.

"And that became everybody's reality for this time as a coping mechanism."

Hayek says the spread of misinformation has also led people around her to start questioning their reality.

"This question of what is real was with every conversation I started talking to people that I knew very well and thought I knew how they thought, and then all of a sudden they start telling you 'this hand has six fingers'.

"You're like, 'what?' 'Yes, the hands have six fingers, but you cannot see...' And they are convinced that this is the truth because there are so many conspiracy theories.

"And even the news - what's fake news? What's not fake news?"

"It's kind of uncanny where we're going."

Bliss is out on Amazon Prime Video now

(c) Sky News 2021: Backstage with Salma Hayek: 'People have created their own Bliss worlds as a coping mechanism'