The Beatles star is still full of "peace and love" and doing his bit for charity, though.

Ringo Starr is giving fans an opportunity to meet him for a charitable cause... but he's still too busy to sign his autograph for them.

The Beatles drummer is auctioning a pair of tickets on Charitybuzz to meet him and see his band play in Detroit on 23 June 2016, in order to raise money for the David Lynch Foundation.

However, the "additional lot details" of the auction states that the "meet & greet will be in a group setting" and "signatures are not allowed". 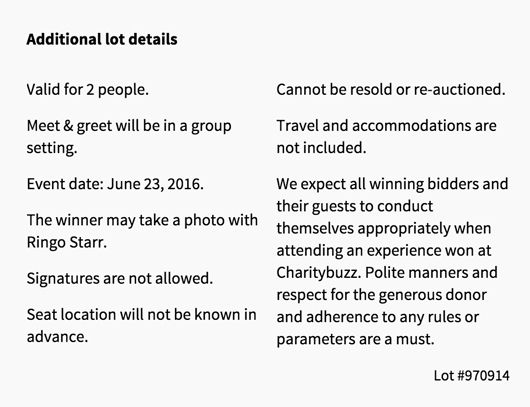 Ringo's anything if not consistent, showing he's still sticking to his "no signatures" rule, following his video post in 2008 which asked fans to stop sending him fan mail.

See his hilarious video below:

It hasn't put off his mega fans though, who've bid $7,250 so far, with six days still left until the auction closes.

Meanwhile, Ringo seems to have had some trouble this week, after being hacked on Twitter where he was seen to retweet the post: "Fuck the Beatles" and comment on Harry Styles' body odour.

This guy wasn't convinced though, seeing as his favourite turn of phrase was missing from the Tweet.

The drummer took to Facebook to restore some order and inform his fans that his team were working to resolve the issue.

For friends following on Twitter the account was hacked this morning and we are working on resolving the issue. Sorry for any confusion this may have caused. Peace & Love, Team Ringo