A man's pet parrot has saved him from a fire that gutted his house.

The man's house in Brisbane, Australia, was well alight when firefighters arrived just after 2am but Anton Nguyen had escaped without injury.

Mr Nguyen said his pet parrot, named Eric, had woken him up before the smoke detectors raised the alarm.

"I heard a bang and Eric - my parrot - he started to yell so I woke up and I smelled a bit of smoke," he told the Australian Broadcasting Corp.

"I grabbed Eric, opened the door and looked to the back of the house and saw some flames.

"And so I've grabbed my bag and took off and bolted downstairs.

"Everything's alright so long as I have myself and the bird."

The fire had "pretty much well engulfed" the house, he added. 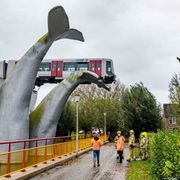 Rotterdam: Train saved from plunging 10m into water... by a whale tail sculpture