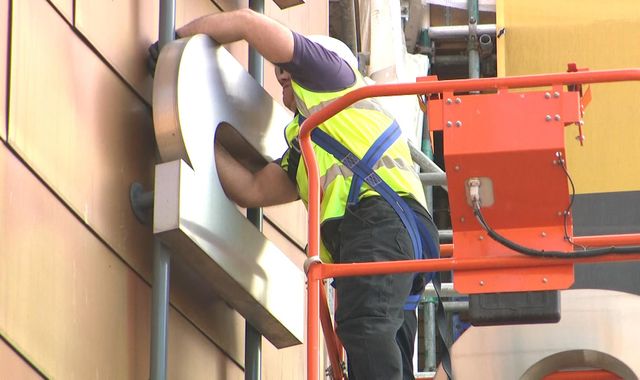 Bristol's main music venue has had the name of slave trader Edward Colston removed from it as the city reacts to Black Lives Matter protests.

The iconic venue, which has played host to musical greats from Queen to The Beatles, was named Colston Hall when it opened in 1867 as it was on the same site that Edward Colston had a sugar refinery in the late 17th century, and then a school he founded.

A plan to change its name has been in the works for the past three years but after Black Lives Matter protesters pushed Colston's statue into nearby Bristol Harbour last week, the venue's management decided to remove the slave trader's name from the outside of the hall without further delay.

The venue, which has undergone a multi-million pound restoration over the past few years, does not yet have a new name.

Louise Mitchell, chief executive of the Bristol Music Trust which manages the venue, told Sky News: "It just feels like the right time, it's always something we've planned to do.

"In light of recent events it's focused our minds that we made a pledge to rename the building and this is a demonstrable evidence that we're serious about doing that."

On what the new name could be, she added: "We're listening, we're talking to communities.

"We were about to go into the final phase of consultation just before lockdown, so we put that aside to deal with organisational survival, putting music lessons online, and now we've picked this up again."

In a statement, the Bristol Music Trust said it is a "symbolic moment" and a "public demonstration of the commitment" it made to change the name, which will be announced this autumn.

"We believe we are here to share the unity and joy that music brings us," it added.

"The hall was built 150 years after Colston's death and not founded with any of his money. We cannot continue to be a monument to his memory."

Edward Colston's name is firmly attached to Bristol, with the former Colston Hall on Colston Street, near Colston Tower.

There is also a Colston Girls' School just over a mile away from the hall, two other schools named after the slave trader, as well as a Colston Yard and Colston Avenue.

His statue, erected in 1895 in honour of his philanthropy, was toppled into Bristol Harbour on 7 June by people protesting against the death of George Floyd in the US and was recovered a few days later.

It will be displayed in a museum with the graffiti and ropes placed on it by protesters.

Colston has been a source of contention in Bristol since the 1990s as the origin of his money became more widely known.

He was originally celebrated due to his large donations of money to schools, hospitals, almshouses, workhouses and churches throughout England, but particularly in his home city of Bristol.

Until the end of the 20th century the fact that most of his fortune was made through transporting more than 84,000 slaves from West Africa to the Americas, of which about 18,000 died en route, was largely ignored.

For the past nearly 30 years there have been numerous campaigns to remove his statue and in 1998 "SLAVE TRADER" was spray painted on its base.

An unofficial art installation appeared in front of it to mark Anti-Slavery Day in 2018, depicting about a hundred figures on a slave ship surrounded by a listing of jobs typically done by modern-day slaves.

Race and Revolution: Is Change Going to Come?

Sky News will broadcast a global debate show on Tuesday night at 8pm - looking at the issues raised by the Black Lives Matter protests, and examining institutional racism and how we fix it.

If you would like to be part of our virtual audience, and have a chance of putting a question to our panel, please send your name, location and question to newsdebates@sky.uk