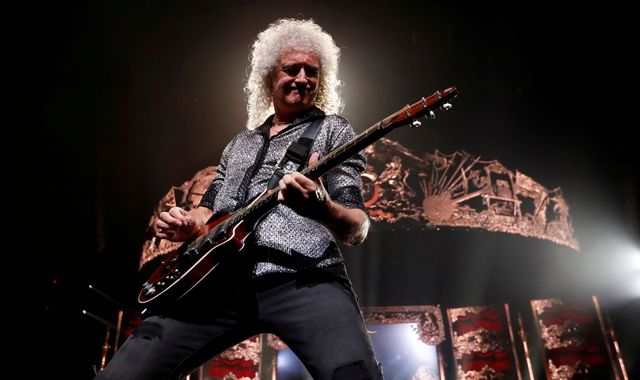 Queen have been asked to play a Live Aid-style benefit gig to help support victims of the devastating wildfires in Australia, the band's guitarist Brian May has revealed.

The environmental activist, 72, will visit the country with the group, fronted by Adam Lambert, in February as part of a world stadium tour.

With the bushfires still raging after several months, at least 25 people have been killed, 2,000 homes have been destroyed and millions of animals are feared to have died, with an area about half the size of Great Britain scorched.

Concert promoters TEG Live and TEG Dainty announced benefit gig Fire Fight Australia to raise funds earlier this week, with the show confirmed for Sunday 16 February amid much speculation about who will perform.

Asked whether Queen would be playing in a fundraising show during their time in the country, May said on Wednesday that fans might see a repeat of the band's famous performance during Live Aid at Wembley Stadium in 1985.

"Of course, we are going there very soon," he said. "We are looking at it very carefully.

"Of course, I am very concerned about the animals. There's 24 people who have died which is a tragedy in itself, but half a billion animals is almost inconceivable."

May described the devastation to wildlife as "like a mass extinction".

"You are looking at a radical change of wildlife in Australia," he said. "It's like a mass extinction, which is something so awful.

"We know there are various things that could have been done. But it is a real caution for the rest of the world."

Queen have seven gigs scheduled in Brisbane, Sydney, Melbourne, Perth, Adelaide and the Gold Coast from 13 to 29 February, with their schedule currently clear on 16 February.

May said there is no official announcement about a benefit show yet as "we don't know what the situation will be" in six weeks, but that the band "are looking at doing something like that".

The musician spoke about Australia's crisis outside parliament in Westminster, where he was promoting the Save Me Trust's Amazing Grace Campaign to help Britain's hedgehogs.

As co-founder of the animal welfare organisation, he was joined by its chief executive Anne Brummer and Tracey Crouch, Conservative MP for Chatham and Aylesford, who is the body's hedgehog champion.

The scheme is also backed by Michael Gove, the former environment secretary.

May defended Mr Gove's record on the environment, saying he had got "a lot of stick" for being a Conservative.

"Michael Gove is already enlisted," he said. "He has been very supportive.