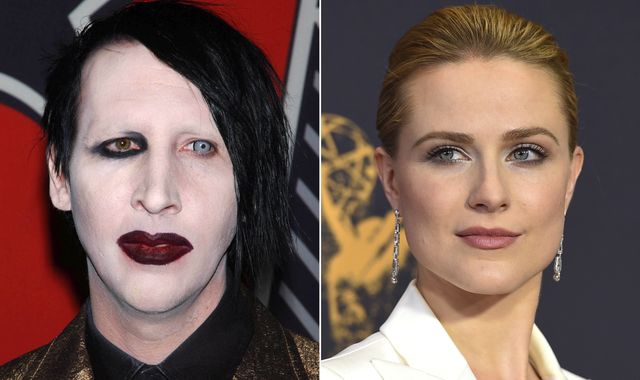 Singer Marilyn Manson is facing a domestic violence investigation over alleged incidents from around 10 years ago, US authorities have said.

It comes after Westworld actress Evan Rachel Wood and three other women earlier this month accused the US rocker on social media of abusing them.

"The incidents occurred between 2009 and 2011 when Mr Warner lived in the city of West Hollywood," the statement said.

Wood, 33, who dated Manson, 52, from around 2007 and was briefly engaged to him in 2010, said the singer "horrifically abused me for years" and "I was brainwashed and manipulated into submission".

"The name of my abuser is Brian Warner, also known to the world as Marilyn Manson," Wood said on Instagram on 1 February. "He started grooming me when I was a teenager and horrifically abused me for years."

Manson has denied Wood's allegations as "horrible distortions of reality".

The pair's relationship became public in 2007 when he was 38 and she was 19, and they were briefly engaged in 2010 before breaking up.

"Obviously my art and life have long been magnets for controversy, but these recent claims about me are horrible distortions of reality," his post said.

"My intimate relationships have always been entirely consensual with like-minded partners. Regardless of how - and why - others are now choosing to misrepresent the past, that is the truth."

The three other women also accused Manson of emotional and psychological abuse in the last 10 years.

The singer-songwriter is known for his Gothic-inspired black outfits and controversial stage personality, and his hits include The Dope Show and Personal Jesus.

He was previously engaged to prominent #MeToo campaigner Rose McGowan and married to burlesque dancer and model Dita Von Teese in 2004, who defended him earlier this month after the allegations were made public.

She said the accusers' experiences of Manson do not match her own, claiming in an Instagram post that she left Manson "due to infidelity and drug abuse".

"Abuse of any kind has no place in any relationship. I urge those of you who have incurred abuse to take steps to heal and the strength to fully realise yourself," she added.

In 2018, Los Angeles County prosecutors declined to file charges against Manson over allegations of assault, battery and sexual assault dating to 2011, saying they were limited by statutes of limitations and a lack of corroboration.

In that case, the accuser was identified only as a social acquaintance of Manson. He denied the allegations at the time.