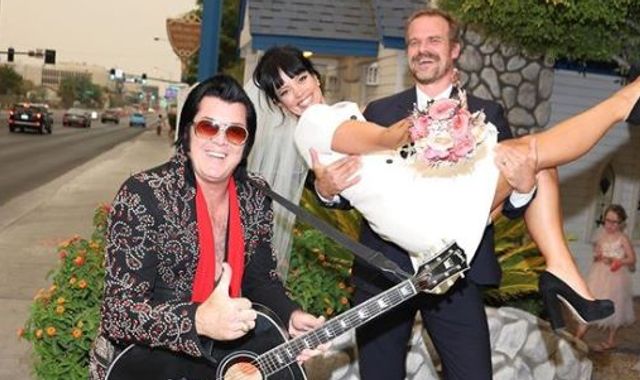 Lily Allen and David Harbour have tied the knot in a chapel in Las Vegas.

The singer, 35, and Stranger Things actor, 45, have been dating since last summer, and Allen has been pictured wearing a diamond engagement ring since April.

Harbour confirmed the news on Instagram and shared pictures of the ceremony, which was carried out by an Elvis impersonator.

The couple celebrated with burger and fries.

Harbour wrote: "In a wedding officiated by the king himself, the people's princess wed her devoted, low born, but kind credit card holder in a beautiful ceremony lit by the ashen skies courtesy of a burning state miles away in the midst of a global pandemic. Refreshments were served at a small reception following."

The couple obtained their wedding licence, which is part of public records, on Monday 7 September, according to US entertainment website TMZ.

Allen appears to have used her previous married name - Lily Cooper - for the registration.

The small event is listed as having taken place at the Graceland Wedding Chapel in Las Vegas Boulevard, Nevada.

Previous celebrities to have wed or renewed vows at the chapel include Jon Bon Jovi, Billy Ray Cyrus, and Four Weddings And A Funeral actress Andie McDowell.

Allen and Harbour have kept their relationship relatively low profile so far, appearing at several events together and sharing photos on each other's social media.

When a fan questioned Allen about the large ring on her finger earlier this year, she cryptically answered: "First rule of engagement club…"

Allen has spent lockdown with Harbour and her two daughters, Ethel-Mary, nine, and Marnie-Rose, seven, from her previous marriage.

They recently holidayed in Croatia together, with Allen calling it a "trip of a lifetime".

Allen and Sam Cooper separated in 2015 after four years of marriage, divorcing in 2018.