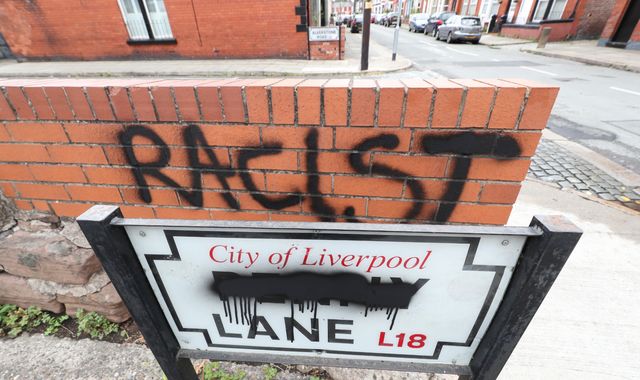 Liverpool's Penny Lane, made famous by The Beatles, is "in danger of being renamed" if links to slavery are found, the city's regional mayor has told Sky News.

Steve Rotherham, the mayor of the Liverpool city region, admitted the road could be renamed if that connection is proven.

However, he added there is "no evidence that is the fact".

"If it is as a direct consequence of that road being called Penny Lane because of James Penny, then that needs to be investigated," Mr Rotherham told Sky News' Kay Burley@Breakfast show.

"Something needs to happen and I would say that sign and that road may well be in danger of being renamed.

"But, of course, there is no evidence that is the fact.

"Just imagine not having a Penny Lane and the Beatles' song not being about somewhere.

"I don't believe it is associated with James Penny."

Widespread protests in support of the Black Lives Matter movement, following the killing of George Floyd in America, have led to calls for statues and place names linked to British historical figures associated with slavery to be taken down.

Mr Rotherham, who described himself as a "massive" Beatles fan who has "done a bit of reading on this", suggested that Penny Lane was instead associated with a toll that was once paid in that area - in pennies - to cross the road.

But he added, as a "58-year-old white middle-aged man", he can "see things through my eyes and I can't see through the eyes of somebody who every single day has faced prejudice, has faced racism".

"It's for other people to decide whether they think it's appropriate that road sign is taken down, if indeed there is any link to either slavery or other incidences," the mayor added.

"I'm not pretending or I wouldn't presume to tell people in communities in the Liverpool city region what they should be thinking.

"It needs to be investigated and then, if it's found as a direct link then action can be taken."

Mr Rotherham said: "Of course, the song wasn't written about James Penny, it was written about an area that the Beatles, when they were off elsewhere, were reminiscing about.

"It's a lovely song and hopefully we'll come to an amicable solution on this one."

The museum is "actively carrying out research on this particular question", a spokeswoman added.

Until the abolishment of the British slave trade in 1807, ships from Liverpool carried around 1.5m enslaved Africans on approximately 5,000 voyages, the vast majority going to the Caribbean.

The city's connections with slavery continued through cotton and other trades that were dependent on slave labour for much of the 19th century.

Was Live Aid the greatest gig ever?