Fans can celebrate what would have been the late singer's 35th birthday on 14 September with album playback sessions across the UK.

Amy Winehouse’s 2006 album Back to Black will play in cinemas across the country on 14 September- the day that would have been her 35th birthday.

The screenings, hosted by Pitchblack Playback and crowdsourced cinema platform ourscreen, are inviting fans to listening sessions of Back to Black, where the album will be played in full through cinemas’ immersive sound systems.

The album - which includes hits such as Rehab, Tears Dry On Their Own and title track Back To Black - will be played with the lights out to allow people to cut themselves off from distractions and to enjoy a heightened sense of hearing.

"It's all about meditating on music", says Pitchblack Playback founder Ben Gomori.

"We aim to give albums the attention and time they deserve. When you turn out the lights, the music feels a lot more intense".

Get the story behind Amy Winehouse's Back To Black single:

Tickets will also include a £1 donation to the Amy Winehouse Foundation, the charity set up by Amy’s family to work with young people who are struggling with issues such as mental health, homelessness and drug and alcohol misuse.

Jane Winehouse, Amy's step-mother and the Managing Trustee at the Amy Winehouse Foundation said: "To be able to immerse oneself completely in Amy’s music will be a very special experience. What a wonderful way to celebrate Amy’s legacy, on her birthday and also the 7th anniversary of her Foundation. We’re hugely grateful to everyone involved for supporting our work with young people."

See the UK venues for screenings on 14 September: 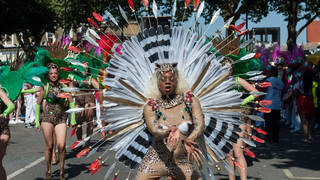