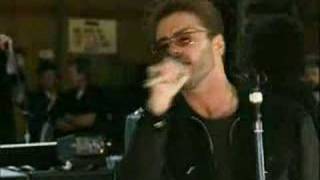 Celebrate the late icon with this throwback performance, which sees him rehearsing for Freddie Mercury's tribute concert as Bowie looks on.

It's hard to believe it's been a whole year since George Michael left us on Christmas Day 2016, but his memory lives on through his immense talent.

This breath-taking clip sees the Wham! star singing Queen's Somebody To Love with the surviving members of the band during rehearsals for Freddie Mercury's tribute concert in 1992.

Not only does he provide an absolutely stunning rendition of the track, but the special clip also sees Seal and the late David Bowie bop along throughout and applaud at the end.

Watch the brilliant footage above.

As The Independent notes, Michael referred to it “the proudest moment of (his) career," but said it was "mixed with real sadness,” due to the fact he had still not made his own homosexuality public, and that his then-secret-boyfriend would die of an AIDS-related illness a year later.

The Freddie Mercury Tribute Concert for AIDS Awareness - which took place on Easter Monday 20 April 1992 - also saw the likes of Seal, David Bowie, Axl Rose and Annie Lennox perform to an audience of 72,000 at Wembley Stadium in a show which was broadcast to over 76 countries across the world.

The concert not only proved to be a fitting tribute to the world class performer who died due to a result of AIDS on 24 November 1991, but it also served to raise awareness and funds for the disease.

When will the Great British Bake Off with Matt Lucas start in 2020?