Watch the video for the band's She's Out Of Her Mind single here.

Blink 182 have paid homage to their What's My Age Again? video by recreating it with women for their latest single.

The punk trio have doffed their caps to the classic vid in the new visuals for She's Out Of Her Mind, which sees three women take the place of Tom DeLonge, Mark Hoppus and Travis Barker.

The new lineup - which has swapped out Tom DeLonge for Alkaline Trio's Matt Skiba - do not feature in the video.

But it does include a male version of the sexy nurse for the women to pass by. He's definitely missing a few tattoos and a bit of edge though... 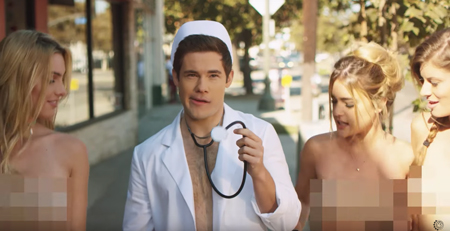 She's Out Of Her Mind is taken from the band's current album, California, which is out now.