If you saw New Order live last year, you would have seen the excellent visuals that accompanied the songs, which included an impressive film to go alongside the opening track, Singularity.

The film featured archive clips of 1980s West Berlin, a nostalgic look back how life, love, music and culture continued despite the city being divided.

Opening with shots of West German punks, the clip travels through the sleaze and struggle of the decade, before winding up with the Berlin Wall coming down while Acid House raves flourished.

Now that New Order are to release Singularity as, er, a single on 18 March, the footage has been re-purposed to become the track’s video.

The clip is a quickly-cut collage of footage taken from an incredible film called B-Movie, which was put together by Mancunian musician Mark Reeder.

Originally in the Frantic Elevators with Mick Hucknall of Simply Red (!), Reeder moved to Berlin in 1978, where he became Factory Records’ German plugger, promoting the bands Joy Division and A Certain Ratio. 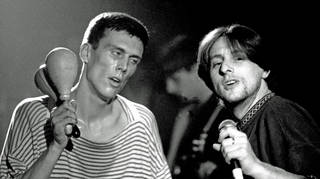