Cloudfest is the latest track from London rockers Dexters. The video features a cameo from the one and only Howard Marks!

Speaking about Dexters and his role in the video, Marks said: “I get a lot of requests to be in videos and what have you but usually decline. On my first listen of Cloudfest it made me want to get high – so I said yes, naturally."

Cloudfest is out on 1 September and is the third track to be taken from their début album Shimmer Gold.

Dexters frontman Tom says: “We wrote this song last summer after we’d played Boardmasters Festival in Cornwall which is this beautiful festival on top of a cliff over looking the sea. We’re all high on life and everything else and got back to the tents and had a jam. The lyrics are “if you don‘t feel inspired, you must be dead inside” just rolled out. It's a feel-good song about being high on life - who better to get star in the video than Mr Nice! He's a legend, full of life and stories. On the way back from the video shoot from Kent we drove back to London. He was pointing out areas nearby he’d hid a stash. Quick as a flash we asked if it’s still there. Quicker than a flash came the reply 'Long gone, sonny!'" 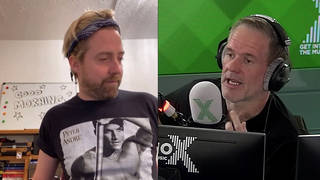