Reading and Leeds are two of the most iconic festivals in the UK. Every band that has become anything has graced its stage at some point. We've taken a look at some of the most notorious moments from over the years.

Back in 2005, Arctic Monkeys were fast becoming the most talked about band in the country. Their era-defining debut still wouldn't be released for another six months when they stepped out on the Carling Stage at Reading Festival that year, but the hype was already overwhelming. On a year when Pixies, Foo Fighters and Iron Maiden were all headlining, it was a sign of the times that the most talked about act from the weekend were four scruffy lads from Sheffield. And then...

Just under ten years later, Monkeys were back headlining the Main Stage for the second time with their fifth, and some would argue best, album AM. The gigs proved that you can strike gold twice in the same place. Although the Reading gig was praised, it was the Leeds end of the festival that people were really excited about. A sort of homecoming for the band, Alex Turner burst into a verse of "Oh Sheffield is wonderful" before playing Old Yellow Bricks.

He'd been out of the limelight for five years and many fans had long given up hope on him returning. But, as Jamie T announced his return in the summer of 2014, excitement began to build. Leeds may have missed out, but when Jamie suddenly jumped on the stage at Reading, word circulated around the festival site like wildfire. His set was stuffed full of new tunes and hits and, more than anything, signified that Jamie T was back in a big way.

The rapper's appearance on the bill in 2004 was greeted with much controversy - Get Rich Or Die Trying may well have been one of the biggest selling LPs on the planet, but with punters paying to see Green Day, Placebo, The White Stripes, The Offspring and more, he was never going to be greeted warmly. What ensued was one of the festival's worst ever bottling incidents, but the festival stood firm in their commitment to bring audiences the most compelling acts in the world.

Easily one of the most iconic festival performances of all time, Nirvana headlining Reading Festival 1992 has gone down in rock n' roll history. Pushed onstage in a wheelchair, Kurt Cobain played up to the rumours of drug abuse and ill health - and went on to perform an era-defining set. It would be the last show they played on UK soil.

The Libertines remind us why we love them so much, 2010

Maybe it was for the money, maybe it was for the love, but regardless of the motive there was only one word that was flying around after The Libertines' 2010 Reading and Leeds reunion - triumphant. It proved that The Libs had put their differences aside and were ready to give things another go. The proper reunion may have taken another four years to emerge, but the R&L 2010 appearance planted the seed and silenced all doubters.

Following the long-awaited release of Chinese Democracy, the new incarnation of Guns N' Roses were still a hot topic. And, in true Axl Rose style, the band were roughly an hour late on stage, causing the show to be pulled early. A visibly disgruntled Rose had to close the set by playing Paradise City with nothing more than a guitar and a megaphone.

Daphne And Celeste are unwelcome, 2000

Like 50 Cent in 2004, pop moppets Daphne and Celeste were brutally bottled off stage in 2000. In fairness to the duo, they stood their ground and took the abuse like champions. Plus, wherever they are now, they can sleep easy in the knowledge that they gave the world the above clip.

Manic Street Preachers make their debut as a trio, 1994

1994 was a rough year for the Manics. In July, guitarist Richey Edwards was sent to rehab and rumours that the band were about the split were rife. But the band performed at Reading as a trio instead of cancelling. They showed the crowds that, despite everything, they were strong enough to carry on. When Edwards disappeared the following year, it was this line-up that would continue to huge success.

If nothing else, Mumford And Sons' 2010 appearance on the NME Stage at Reading and Leeds is a crystal clear snapshot of a band on the verge of superstardom. The tent was packed out and the audience were adoring. The faces on the band as they close the show with The Cave says one thing - there's no going back now! 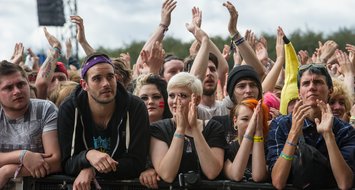 Get the latest on Reading and Leeds Festivals

QUIZ: Guess the year of this Reading and Leeds line-Up