Tom Grennan reflects on split: "I was probably the toxic one in the relationship"

The Oh Please singer has opened up about the breakdown of his relationship, which inspired much of his next album.

Tom Grennan has talked about his past relationship and the inspiration it had on his new album.

The Oh Please singer is preparing to release the follow-up to his Lighting Matches debut and has talked about how his fame and success affected his relationship.

He told The Sun newspaper's Bizarre column: "I just thought the sun shone out my arse for a minute. I forgot about the real person who loved me for me.

"I ended up blaming loads of things on this girl and unfortunately I was probably the toxic one in the relationship."

Grennan also revealed that he quit booze and cigarettes during lockdown and improved his health and fitness.

"Through lockdown I didn't drink, I stopped smoking, I've got fit," he revealed.

"I'm trying to get my mind as healthy as possible and be the best person I can be. "I couldn't go on stage and I couldn't function properly with a mashed-up head. I just couldn't do it."

VIDEO: Tom Grennan Opens Up About Struggle With Dyslexia

Speaking to previously to Radio X about his ex, Grennan revealed she'd heard some of his new material.

Speaking at the Global Awards 2020 with very.co.uk, he revealed: "I kind of had to dig deep for this album. This whole album is about this breakup that I’ve just gone through and it’s been a hard, tough time, but the lyrics have just come from that really.

“And It’s more of a thank you letter, it’s more of a sorry note. I’ve had to get deep with my lyrics this time and pull them from the depth of my heart".

Quizzed if he asked his ex if he could write about the breakup, he replied: "I have had a conversation with her and we’ve stayed friends. She’s heard a few of the songs already and she’s really happy. She’s buzzing for me.” 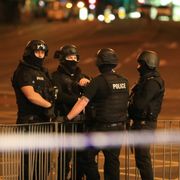 Has Emma Watson retired from acting?