The Welsh frontman told Radio X's Chris Moyles what to expect from their new LP, as the band shared its new artwork on Twitter.

Sterephonics' Kelly Jones has announced that the title of their upcoming album is Scream Above The Sounds.

Speaking to Chris Moyles on Radio X this morning, Kelly Jones said: "This has been finished about 11 months, so I'll be glad when it gets out, as otherwise I'll be ancient."

The band then took to their official Twitter to share the artwork, writing: "We are delighted to announce our new album #ScreamAboveTheSounds. Pre-order now from stereophonics.com ."

Meanwhile, the Welsh frontman also previewed their All In One Night single, which is available as an instant grat. when the album is pre-ordered.

"But this song particularly I wrote in a hotel room in China, we were stuck there for a day before we had to get a flight home."

He added: "It was kinda inspired by this German film I saw"

Watch their chat in our our Facebook live below: 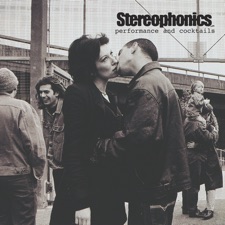