Royal Blood are a two-piece band formed in Brighton and comprising Mike Kerr on bass and vocals and Ben Thatcher on drums.

They are much loved by Arctic Monkeys - Matt Helders was wearing a Royal Blood t-shirt during their 2013 summer festival run, including Glastonbury. They also share management with Arctic Monkeys and opening for them at their Finsbury Park dates in May 2014.

Their self-titled debut album was released in August 2014. 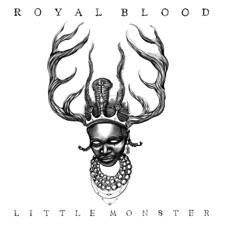