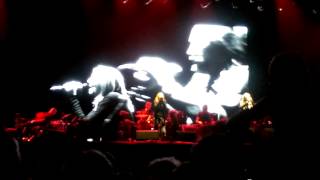 And that’s not the only treat the Radiohead man had for festival goers last night (Saturday 18 July). He also appeared onstage with main stage headliners Portishead at the Suffolk event.

Yorke performed vocals on the Portishead song The Rip with singer Beth Gibbons, a song Radiohead have been known to cover in the past.

He later appeared in his own solo slot, performing songs from both his solo albums: The Eraser and Tomorrow’s Modern Boxes.

The appearance was hinted at earlier in the day by Radiohead producer Nigel Godrich.

Meanwhile, there was another surprise over the weekend as Ed Sheeran took leave of his Wembley Stadium residency and played an hour long show at 11pm on Friday night on the small iArena stage in the woods. He then reappeared at the Other Voices stage on Saturday afternoon.

Only experts can name which artists recorded these B-sides

This Mariah Carey and Radiohead mash-up will get Christmas started