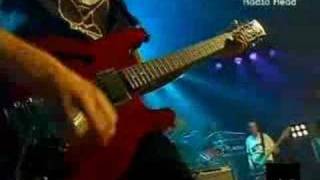 After a huge and very mysterious bet was put on Thom Yorke and co. to record the theme song for the next 007 film Spectre, speculation is running wild.

William Hill has suspended betting on who'll make the music for the next Bond film, due out later this year, after a punter tried to place £15,000 on Radiohead to do the honours.

While the frontrunner for the job had previously been Ellie Goulding, it wouldn't be such a huge surprise if Radiohead did record the track. Previous 007 singers have included Jack White, Paul McCartney and Garbage, who recorded the theme for The World Is Not Enough. London Calling by The Clash also featured on the soundtrack for Die Another Day.

The odds of Thom and the boys doing the theme had been at 10/1 before the huge bet. Coldplay are also rumoured to be in contention, as well as Florence + The Machine, but both are now considered to be outside bids.

A spokesman for the bookmakers added: "Surely nobody risks £15,000 on a hunch."

Radiohead have previous with Bond Themes too, thanks to their brilliant cover of Nobody Does It Better by Carly Simon, the theme from The Spy Who Loved Me.