This Is The Book That Gave Be Here Now Its Title

It was one of the most keenly-awaited albums of the Britpop era… but did Noel and Liam Gallagher know where the title really came from?

It’s difficult to describe how much anticipation there was for the third Oasis album back in 1997.

Definitely Maybe had seen Noel and Liam Gallagher come straight out of the blocks in 1994 with a bona fide classic debut, while the following year’s (What’s The Story) Morning Glory? blew all expectations out of the water, making it one of the most successful British albums of all time.

So, with two enormous gigs at Knebworth under their belt, where did Oasis go next?

The time between the release of (What’s The Story) in October 1995 and the follow-up in the summer of ’97 seemed like an age at the time. The long, hot summer of 1996 had seen the peak of Britpop… but was the wave set to come crashing down?

With the release of the first single, D’You Know What I Mean? on 7 July was a BIG moment for fans. Even the single version “edit” of this track came in at a touch under six minutes and the video had helicopters, big production values and enormous riffs.

When Be Here Now dropped into shops on Thursday 21 August 1997, it became the fastest-selling album in British chart history. Critics couldn’t help but note that this record wasn’t just a collection of songs, it was an EVENT.

But behind the bombast and the swagger, the title of the record actually had a very spiritual meaning.

Noel Gallagher is a huge Beatles fan, so it’s likely he picked up the title for album from a track with the same name on George Harrison’s 1973 album Living In The Material World.

But where did George get it from?

In his autobiography I Me Mine (published in 1980), the former Beatle recalled that he wrote the song in early 1971 when he was working with Indian sitar legend Ravi Shankar on a documentary title Raga. "I was almost falling asleep. I had the guitar in bed and the melody came fast."

Later in 1971, American spiritual guru Ram Dass published a book called Remember - Be Here Now, describing his spiritual transformation from his life as plain Dr Richard Alpert. The phrase had gained popularity in the late 60s when Eastern philosophy - particularly that of the Hindu religion - became part of the spiritual awakening of the hippie movement. The title was adopted by George when he came to writing lyrics for the melody he’d come up with two years earlier.

The phrase “Be Here Now” essentially concerns the idea that thinking about the past or the future means the person loses focus on the only thing that is real: the here and now.

Which, for Oasis in the heady summer of 1997, was probably exactly where their heads were at.

Meanwhile, Baba Ram Dass followed up his book in 2011 with a book called Be Love Now: The Path of the Heart.

That's a good name for an album, eh Liam? 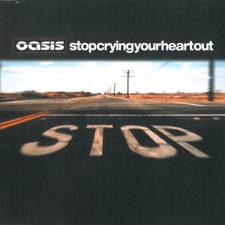 Stop Crying Your Heart Out
Oasis
Download on iTunes

QUIZ: Do you know the lyrics to Go Let It Out by Oasis?

What did Oasis play at their last ever show?