A demo version of the Oasis classic She's Electric has been revealed ahead of the release of a reissue of (What's The Story) Morning Glory?

The release is the second in the Oasis: Chasing The Sun series, following May's release of Definitely Maybe.

(What’s The Story) Morning Glory?  features many of Oasis’s biggest singles, including Don’t Look Back In Anger, Wonderwall, Some Might Say, and Roll With It, and won the Best Album at the 1996 Brit Awards, with Oasis also taking Best British Group and Best Video awards.

Big Brother Recordings have revealed the contents of the Super Deluxe Box Set of (What’s The Story) Morning Glory?, which is released on 29 September 2014.

The reissue will be packaged in a large gift box and will include:

All pre orders of the Super Deluxe Box set via Oasisinet come with a replica of the original Some Might Say 12" featuring B sides Talk Tonight and Acquiesce (Remastered). 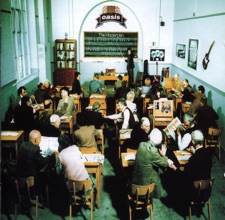