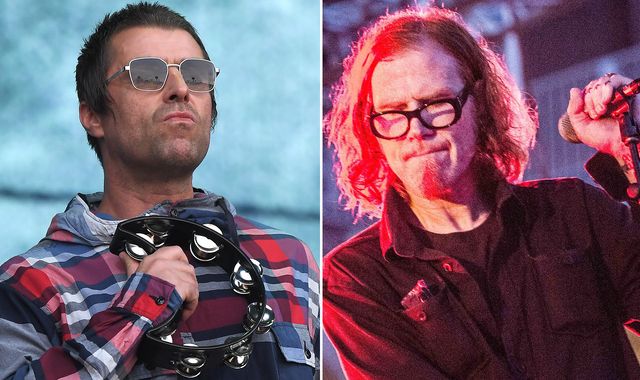 Rock star Mark Lanegan has extended an olive branch to "eccentric" Liam Gallagher after his recently released autobiography reignited a 1996 feud between the pair.

Lanegan, former vocalist of grunge band Screaming Trees and a frequent collaborator with Queens Of The Stone Age, wrote in his memoir Sing Backwards And Weep that the Oasis star dodged a planned fight in Miami 24 years ago.

In the book, published at the end of April, the US musician describes Gallagher as "a playground bully" and a "total p****", and a photograph of the segment was quickly picked up on social media.

He claimed the bust-up began on tour when the Manchester-born singer shouted "Howling Branches" at him, in an apparent attempt to make fun of the band's Screaming Trees name.

Lanegan says Gallagher left the US leg of Oasis's (What's the Story) Morning Glory? tour - which was supported by the Trees - to avoid fighting with him in Miami.

Gallagher, not one to stay quiet, responded by saying he had been joking, calling Lanegan an "uptight junkie" and "another bullsh***** trying to sell a book" on Twitter.

Now, Lanegan has attempted to clarify the comments and said he thinks Gallagher is "not a bad person".

Explaining his retelling of the events, he said: "That's written from the viewpoint of a guy, 24 years ago, and that doesn't reflect how I actually feel about him now.

"I see his clips on Twitter now and it makes me laugh. He's kind of an eccentric old uncle. Also, I'm aware he does some good deeds in the community and he's not a bad person."

Lanegan says there is no ill-feeling towards Gallagher.

"He was anything but hard, he never has been hard, he's a p****, but that doesn't mean I hold a grudge against the dude," he said.

"I wrote that from a standpoint of how he came up on me 24 years ago, like he was some tough guy trying to f****** intimidate me and that just doesn't happen."

Of course, this is not the only Twitter spat Gallagher has got into, having been involved with an ongoing war of words with big brother and former Oasis bandmate Noel for several years, following the group's acrimonious split in 2009.

Liam has called for the band to reform many times - most recently for a gig to support the NHS when the coronavirus lockdown is over - but Noel has previously said a reunion isn't happening.