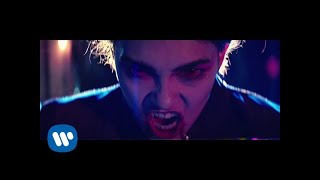 Get the latest single to come from Matt Bellamy and co. and its accompanying electrifying visuals.

Muse have given us a taste of some new material in the form of Thought Contagion.

Watch their video above.

Its first scene makes a nod to their last Dig Down video, seeing a male protagonist play a computer game of the same name.

The electrifying promo takes plenty of influence from 80s sci-fi and even includes a cheeky dance sequence reminiscent of Michael Jackson's Thriller video.

Matt Bellamy said of the track: “The meaning of the song Thought Contagion is about how other people’s thoughts, ideas and beliefs can sometimes infect your mind, get into your head and change the way you think yourself."

The action-packed visuals for their previous single saw the band perform in powder blue suits and and follows a kick-ass heroine.

Watch Muse tell the story of Plug In Baby:

QUIZ: Do you know the words to Muse's Knights Of Cydonia?