The Marks To Prove It five-piece will play an extra date at London's Alexandra Palace.

Due to unprecedented demand, The Maccabees have added a fifth date to their 2017 farewell tour.

After announcing shows in Manchester and London respectively, the Marks To Prove it outfit have now confirmed they will play a third and final London date at Alexandra Palace on Thursday 29 June 2017.

This will be followed by two sold-out homecoming gigs at the iconic north London venue.

See their updated poster below: 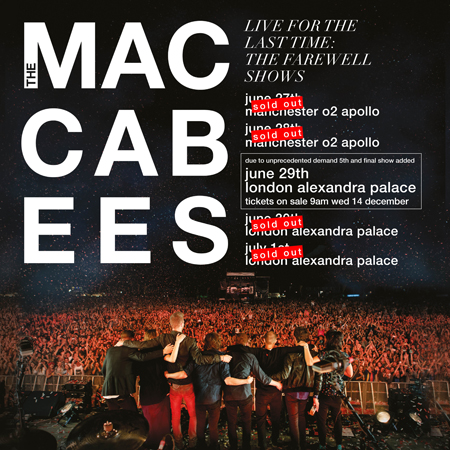 Tickets go on sale on Wednesday 14 December from 9am.

Felix White said of the news: “We're planning on these final shows being a huge celebration, thank you and goodbye to 14 years of writing, recording, playing and touring together.”

See their fully announced dates below:

Announcing their split back in August, the Love You Better band revealed they would "not be leaving the group behind as a divided force".

A message to our fans…. With Love, The Maccabees x pic.twitter.com/v2DN0PMP4R