Doherty performed at the Parisian venue, with support from his Libertines bandmate Carl Barat.

Pete Doherty played a gig at Le Bataclan, where he led the crowd in a rendition of the French National Anthem.

The Libertines frontman helped to reopen the venue just over year after the horrific terrorist attacks, which saw 89 people killed during an Eages Of Death Metal gig.

Joined by bandmate Carl Barat, Doherty sang a rendition of the national anthem, La Marseillaise, accompanied by a violinist.

Watch a YouTube video of the moment, courtesy of TheHalfcentury, below:

The pair also brandished a flag, which read "Fuck Forever Terrorism". See an image of the Don't Look Back Into The Sun rockers here: 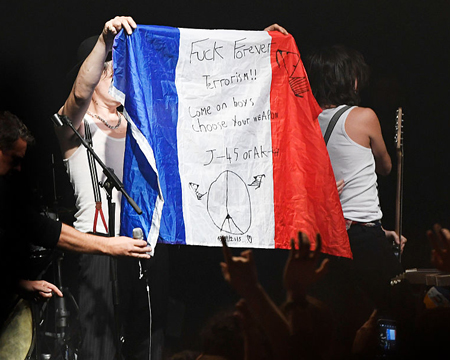 The venue was officially opened by Sting last weekend, who held a one minute silence during his gig.

Watch the Police star address the crowd in French here:

Sting and Doherty's shows at the venue will be followed by performances from Senegalese singer Youssou N'Dour, who will play this Friday and Saturday night on the 18th and 19th of Novmeber respectively.

Can't Stand Me Now
The Libertines
Download on iTunes