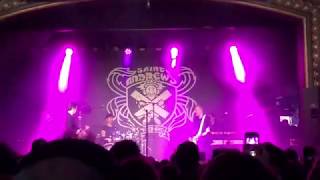 The Never Gonna Give You Up legend performed the band's Everlong anthem in the States this weekend.

Rick Astley has paid tribute to Foo Fighters once again by covering their Everlong single.

The 80s pop legend played Detroit's Saint Andrew's Hall this Saturday (21 April) where he decided to open his Encore with one of the US rockers' most-loved tracks.

See him in action in a video shared on YouTube by apronstringsemily above.

It's not the first time Astley's performed the single however, giving Dave Grohl and co. a nod back in 2017 at We Are Manchester, which witnessed the re-opening of the Manchester Arena.

Rick Astley became friends with the Foos last year, when he was invited to play his Never Gonna Give You Up anthem with them on more than one occasion.

Watch them perform the track - which was mashed up with Nirvana's Smells Like Teen Spirit - at The O2, London.

Meanwhile, not content to wow crowds on the other side of the pond, the Newton-le-Willows legend appears on the latest series of The Keith and Paddy Picture show.

Watch as Dave Grohl kicked a fan off stage in Australia: