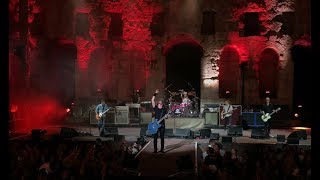 Watch the rockers give the Concrete And Gold track its live debut.

Playing Greece's ancient theatre of Herodes Atticus under the Acropolis, the Learn To Fly rockers played new track Arrows, which is believed to be taken from their forthcoming Concrete and Gold album.

Watch it here above courtesy of Roxx gr.

Arrows is the latest new song to be shared by the band, following the likes of The Sky Is A Neighborhood in San Francisco and Dirty Water In Paris.

The track was park of a 20-song set, which much like their Glastonbury set included much-loved hits such as Times Like These, These Days, Best Of You and Everlong.

Dave Grohl opened their epic set on the Pyramid Stage last month, by paying tribute to Florence + The Machine, who filled in for them after he broke his leg in 2015.

As Dave Grohl walked onto the Pyramid Stage alone, he told the crowd:  “For all of you who were here in 2015, I’m sorry I missed you. But I watched that show on my laptop and it looked beautiful.

"My friend Florence  got to headline that year and I’m very happy that that happened, because I thought she should have been headlining anyway.

“As I was siting in my wheelchair with my broken leg, she played a fuckin’ Foo Fighters song. Way better than we’ve ever played it.  So I thought I’d start the show tonight, singing that song back to Florence.”

The band also dedicated their anthemic Everlong track to their late fan Laura Plane, keeping true to his word to her widower Jon.

Following her sad passing in May, her widower Jon Plane contacted Dave Grohl through Twitter to ask if the band could perform the track in her memory at this year's festival.

Jon and Laura - who lost her eight-year battle with cancer this year - chose the track as their first dance at their wedding and were due to watch Foo Fighters to celebrate their 10-year anniversary, but had to cancel as she was too ill.

Jon's request was picked up on social media and was retweeted more than 12 million times, leading to the frontman penning a handwritten note to Jon, which he shared via a photo uploaded to Twitter.

The 48-year-old rocker wrote: "Jon - Dave here. Heard about Laura. Sending you much love and hope and light. Will be thinking of you at Glasto. Take care mate."

Big Dave was true to his word: before bringing the set to a climax, he said that the next song was for "Laura... who couldn't be here tonight."