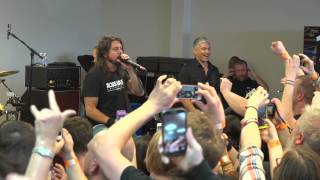 Foo Fighters have shared a short documentary for Record Store Day 2015. The film sees the band performing in a record store in Nile, Ohio this April.

The venue, independent store Record Connection, is one of the venues that Record Store Day tries to highlight.

Can you name the Foo Fighters songs from an emoji?

Can you identify the rock star from the name of their mother?