Catfish And The Bottlemen: "It's like walking on a tightrope at the moment"

Here at Radio X we are very big fans of Catfish And The Bottlemen. The Llandudno four piece received their very first radio airplay from Radio X and have already headlined one of our First Friday nights at Band on the Wall in Manchester.

They are also one of our Great X-Pectations for 2014. Download a free live version of their track Homesick>>

Speaking to Danielle Perry on last night's Radio X Evening Show, frontman Van McCann gave us an update on how their debut album is progressing.

"We've just been in the studio, pretty much locked down, just getting the album ready and stuff," he explained. "It's going really well. We've narrowed 70 songs down to 15 now and we're just chipping away at them now, making them as good as they can be.

Van remained tight lipped when questioned over if they might be on the Glastonbury line-up but admitted they have a lot on this year.

"The diary is packed, for instance we're really set on a producer we want to work with for the album but if he's too busy for it by like... a day then the schedule is up in the air, everything's back to the drawing board. It's nice, it's like walking on a tightrope at the moment."

The band head out on tour in February: 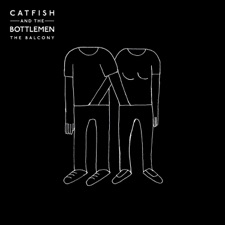