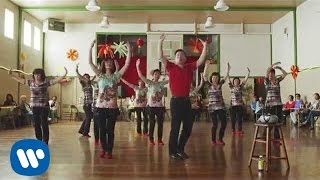 Watch the video to the opening track from The Magic Whip... it features some keen dance moves.

Lonesome Street is the third track to be released from Blur's forthcoming album and is available as an "instant grat" track if you pre-order the LP, as well as There Are Too Many of Us and Go Out.

Writing on Facebook, the band said of the video: "Need some new moves for the weekend? Here's some inspiration, the Phoenix Fly Dancers do Lonesome Street."

LISTEN: Blur talk to Radio X about their new album, The Magic Whip

Lonesome Street is Blur doing what they do best - a huge, jaunty pop rock anthem. It's the track that opens the band's first album since 2003's Think Tank and the first with Graham Coxon since 1999.

The Magic Whip is released on Parlophone on 27 April 2015 and was recorded in Hong Kong.

Check out the other new track from Blur, Go Out