The Stockport band have nailed a further week at the top of the UK album charts with their self-titled debut.

Blossoms kept off stiff competition from the likes of ELO and Drake to bag another week at Number 1.

At one point earlier this week, it looked like Jeff Lynne’s 70s rockers might triumph with their compilation All Over The World, but Blossoms fans fought back. Canadian rapper Drake has been in the charts for 15 weeks with his album Views, which has risen to Number 2 after being at Number 3 last week.

Blossoms frontman Tom Ogden told Radio X: “We’re totally made up. It’s crazy to come from a scaffolding yard in Stockport, not knowing where this was going to take us, to being top of the charts. It’s surreal.”

When the group heard they’d hit the top of the charts last week, they were playing Boardmasters festival in Cornwall, before flying off for another show in Romania.

“We just took it in our stride,” said Tom. “We had a good celebration, though.”

The band are already noticing the difference having a debut album in the shops has made.

“We did two shows at Gorilla in Manchester and the crowd were singing the album tracks - that blew me away. It also gave me a taste of what the album tour will be like. That’s how we feel the songs sit the best - with the crowd singing them back.”

Blossoms play Reading and Leeds Festivals next weekend, before heading off on a major tour of the UK in September and October. 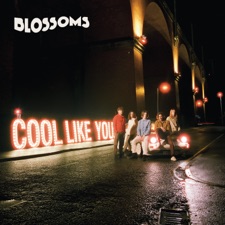