The establishment, which is set to open this autumn, has credited the AM drummer for creating the music on their advert.

Matt Helders has appeared to lend a hand to a bar opening in his native Sheffield by creating the music for its advert.

Watch the clip which above, courtesy of @P_U_B_L_I_C_.

The Arctic Monkeys sticksman is credited on a video which was tweeted out by Public, alongside the caption: "Arriving in the Autumn..."

Arriving in the Autumn...

The simple synth-laden beats are are quite the departure from what we're used to hearing from the Arctic Monkeys' man, and might be more at home on an album from The xx.

Meanwhile, Helders has clearly been busy of late, telling a fan we can hopefully expect a new Arctic Monkeys album in 2017.

According to mega-fan, Will Franco - who bumped into Helders at Royal Blood's gig at The Wiltern Theatre in L.A - the rocker confirmed their new album will drop "hopefully by the end of the year".

See Will, who chose his Instagram name based on the band's When the Sun Goes Down track, pose with the drummer below:

When asked in the comment section if he quizzed Helders about the new record, the fan replied: " I did. He told me hopefully by the end of the year". 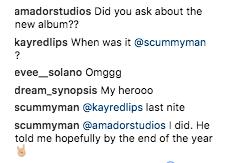 While we can't confirm if the reports about the follow up to 2013's AM are true, one thing we can all agree on is that the band's frontman loves a bit of karaoke.